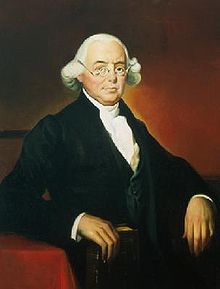 It was on this date, December 15, 1790, that the first U.S. school of law was established at the University of Pennsylvania, after a series of lectures by James Wilson, a signer of the Declaration of Independence and a Justice of the first U.S. Supreme Court. Penn began offering a full-time program in law only in 1850, as most lawyers "read the law," that is, apprenticed to experienced lawyers, before becoming lawyers themselves, rather than attending law school. The training and certification of legal service providers was a major development in not just legal history but in the history of government — a further step in the upward evolution of democracy.

It is often claimed that Christianity gave us a better-ordered society by giving us the law as we know it today. So says one of many books making that claim:

Our legal system was formed and developed over centuries under the dominating influence of the Christian religion. ... Our very concepts of justice, due process and the rule of law are Christian ideals that we should never have known had the Christian faith not taken root in this land and transformed the nation from a pagan into a civilised society.*

In fact, the very opposite is the case. Just as it was freethinkers, not Christians, who made the world safer for children, decreased crime, ensured the right to divorce, revived education, equalized marriage, and ended slavery and torture — it was freethinkers who revived law as the ancient (pagan) Romans knew it, and carried it forward to the institution we know today.

In earlier civilizations — Egypt, Babylon, Persia and Greece — law and the administration of justice were at a much higher level than we find in Christian Europe until the Enlightenment. If a Roman of about the time of the last pagan emperor, Licinius (300s CE), were dropped into Europe some seven centuries later, in 1000 CE, what would he see? As legal historian John M. Zane describes it, he would "have been astonished at the eclipse of all forms of respectable legal administration" ... that "a black night of lawlessness and disorder seemed to have settled down in every one of these once prosperous lands" ... and that law was "an institution of the past," replaced by greed, cruelty, and intolerance.**

It is almost comical to see the absurd, procrustean lengths to which Christian apologists will go to try to fit the square peg of canon law into the round hole of secular law, which developed in Europe in spite of the churches. Modern freethinkers are then left to wonder why it took the followers of Christ until the Encyclopedists in France and Beccaria in Italy, and Bentham, Romilly, Mackintosh, and others in England, to institute the legal, juridical and prison reforms we take for granted today — and why the struggle continues to secure rights for workers, for women, for children, and homosexuals, not to mention rights for religious minorities and freethinkers.

Until the modern era, the brutality and barbarity of the law, especially in Catholic countries, was unabated. Michelet quotes, in his history of French law, a lord of the Middle Ages who happily abused a serf, saying, "He's mine — I can boil him or roast him if I want." Such tortures happened with appalling frequency in Christendom — "under the dominating influence of the Christian religion."

* Stephen C. Perks, Christianity and Law: An Enquiry into the Influence of Christianity on the Development of English Common Law, Taunton, Somerset (UK): Kuyper Foundation, 1993. ** John Maxcy Zane, The Story of Law, New York: Ives Washburn, 1927. One reviewer, who doesn't get Zane's point, writes, "It is to be regretted, however, that Zane placed little emphasis on the role religious thought played in shaping Western legal principles and institutions. His story is for the most part a secular one, its heroes consisting of urbane Roman lawyers and largely secularized Englishmen and Americans. As recent scholarship has shown, however, the canon lawyers of the twelfth through fifteenth centuries made an enormous contribution to the history of Western law. Indeed, it has been convincingly argued that a distinctively Western law was only born in 1075 in the course of a "Papal Revolution" led by Pope Gregory VII against the domination of the Church by the Emperor Henry IV. It was at that time that lawyers in attendance at the papal and imperial courts began to rework older sources into coherent claims of legal right on behalf of their patrons.
"Similarly, Zane ignores the contributions of Protestant lawyers, whether in Lutheran Germany or in England in the mid-seventeenth century. But the Lutherans gave to the West a new emphasis on the Ten Commandments as a source of natural-law reasoning as well as new methods for organizing the law, while deeply devout Protestant lawyers such as Sir Matthew Hale (1609-76) — whom Zane dismisses in a few lines because of his participation in witch trials — contributed to the shaping of a new English legal philosophy that stressed continuity with the past, an adversary system of presenting evidence, and new standards of proof drawn from the scientific methods of Robert Boyle and other members of the Royal Society."

Here’s your Week in Freethought History: This is more than just a calendar of events or mini-biographies – it’s a reminder that, no matter how isolated and alone we may feel at times, we as freethinkers are neither unique nor alone in the world. Last Sunday, October 28, but in 1955, the entrepreneur who became […]