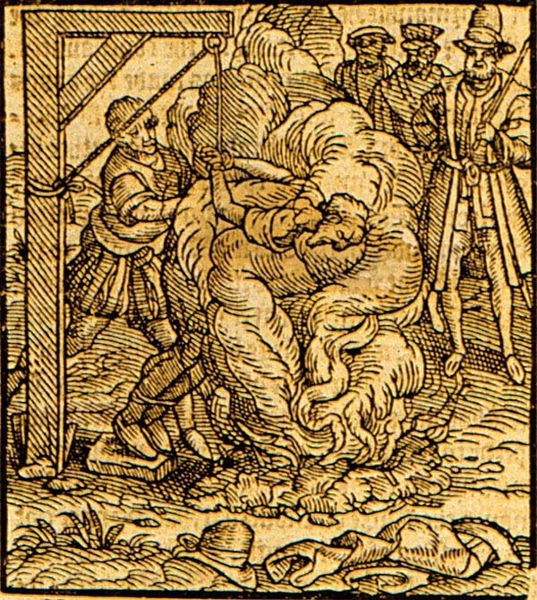 The hanging of Sir John Oldcastell
Aboute the same season, was sir John Oldcastell, Lord Cobham taken . . . not without daunger and hurtes of some that were at the taking of him, for they could not take him, till he was wounded himselfe. . . . in the end he was condemned, and finally was drawen from the tower unto S. Giles fielde, and there hanged in a chayne by the midle, and after consumed with fire, the gallawes and all.
—from Holinshed's Chronicles (1577)

It was on this date, December 14, 1417, that Sir John Oldcastle, a leader of the Lollard religious sect, was hanged and burned in Britain. He was born in Herefordshire on an unknown date in 1378, matured as a soldier, then adopted the teachings of John Wycliffe (1324-84). Oldcastle married into nobility and served in the House of Lords as a baron. But his attachment to Wycliffe's reforms got him indicted for heresy by a convocation in 1413.

The Lollard name is of unknown origin and meaning, but signified a return to a simpler creed. It is characteristic of the teaching of European history that it assumes the general populace acquiesced in all the ideas of a church that diverged radically from the organization founded under the original gospels. In fact, the enlightenment at the end of the Dark Age sparked pointed criticism of the Roman Church. Sects arose — Albigensians, Waldensians and others — and because the papacy had armed thugs at its disposal, thanks to the Crusades, differing opinions were bloodily silenced.

As ex-priest and historian Joseph McCabe describes it,

Although the population of England was then less than 4,000,000, authorities estimate that Wycliffe had about 500,000 followers, or nearly half the adult males of all classes. ... In spite of royal and clerical pressure and many martyrs — the death-sentence for heresy in the statute De hæretico comburends was passed in 1401 — the Archbishop of Canterbury complained that they [Lollards] were as numerous as ever in 1428, and the movement persisted until it was absorbed in the Reformation.*

The Inquisition had no influence in England, but it wasn't necessary in Oldcastle's case. His social rank got the 1413 sentence stayed while he was imprisoned in the Tower of London. But he escaped, took part in a failed kidnapping plot against the king, escaped again, and evaded capture until November 1417. Parliament demanded his life, so on December 14, Sir John Oldcastle was executed in London by hanging over a slow fire. Shakespeare's character Falstaff, in Henry IV, was based on Oldcastle.**

* Joseph McCabe, A Rationalist Encyclopaedia, "Lollards." McCabe cites G.M. Trevelyan, England in the Age of Wycliffe (3rd ed., 1904), and E. Powell and G.M. Trevelyan The Peasant-Rising and the Lollards (1899), as his sources. ** A play attributed to Shakespeare, but authored by another hand (or hands), was published in London in 1600 under the title of The History of Sir John Oldcastle. The three parts of Henry IV were performed in 1590 and published 1594-1598.

Bill Gates (1955) It was on this date, October 28, 1955, that the entrepreneur who became chairman and CEO of Microsoft Corporation, the world's largest software firm, Bill Gates, was born in Seattle, Washington. Born William Henry Gates III, Bill Gates was an exceptional student. After co-founding Microsoft with friend Paul Allen, Gates used quasi-legal […]