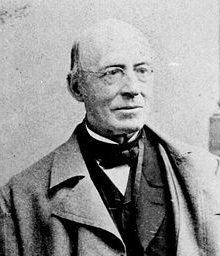 It was on this date, December 13, 1805, that the great American abolitionist William Lloyd Garrison was born in Newburyport, Massachusetts. Apprenticed early on to a printer, he rose to become editor of several journals after becoming involved in the early fight against slavery, a socially destructive institution the churches had long ignored — when they did not outright support it. While co-editor of Benjamin Lundy's anti-slavery paper, Genius of Universal Emancipation, Garrison criticized a merchant involved in the slave trade and was imprisoned for libel.

He later founded and edited the Boston Liberator, whose motto was: "Our country is the world — our countrymen are mankind," based on a quotation by Thomas Paine. Garrison was influenced not only by the Deist Paine, but by skeptical feminists such as Susan B. Anthony, Elizabeth Cady Stanton, Lucretia Mott and Lucy Stone. He harshly criticized the churches, north and south, for neglecting to condemn slavery — some of the churches actually owned slaves — and in return the southern churches put a bounty on his head.

Garrison himself never went to church. In the biography written by his children, he is described as a Theist who had "quite freed himself from the trammels of orthodoxy."* Even the Unitarians disliked Garrison. He died on 24 May 1879. It was William Lloyd Garrison who said, "All Christendom professes to receive the Bible as the word of God, and what does it avail?"**

Émile Combes and Church-State Separation (1904) It was on this date, November 8, 1904, that leftist French statesman Émile Combes introduced a bill for the separation of Church and State into the legislature of France. Born Justin Louis Émile Combes in Roquecourbe in the Tarn départment, Combes at first studied for the priesthood. After becoming […]