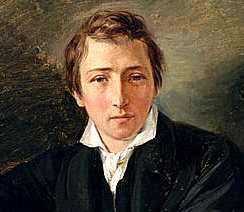 It was on this date, December 13, 1797, that one of the greatest poets of the mid 1800s, Heinrich Heine, was born in Düsseldorf. Heine was pushed toward a commercial career, studied at the universities of Bonn (under Schlegel), Berlin (under Hegel) and Göttingen. But though he took a degree in 1825, Heine was more interested in literature than in law.

In 1825, Heine renounced Judaism and adopted Christianity because it was "a ticket to civilization," but he had no regard for either religion. "If the law had allowed me to steal silver spoons," he said, "I would not have been baptized."* After 1830 he lived in Paris and married Crecence-Eugénie Mirat. On 10 December 1835 he had the honor of a ban by the German Diet on all his works throughout Germany. Heine's chief works are Buch der Lieder (1927), his four-volume Reisebilder (1826-31), many poems, such "Die Grenadiere" ("The Infantry") and "Lorelei," a long verse satire, Deutchland: ein Wintermärchen (Germany: A Winter's Tale, 1844), and what many consider his finest collection of verse, Romanzero (1851), published while he was severely ill.

In 1847 Heine had an attack of paralysis, and shortly became blind. It was only then that Heine said he believed in God: "Dieu me pardonnera. C'est son métier": "God will forgive me. It's his job." He told his friends of his conversion that they could "put it down to morphia and poultices." Heine died in Paris on 17 February 1856. "It must require," he said, "an inordinate share of vanity and presumption, too, after enjoying so much that is good and beautiful on earth, to ask the Lord for immortality in addition to all." Heine's works carry many caustic references to religion — and a warning, in Almansor (1820-21): "Wherever books will be burned, men also, in the end, are burned."

"It would be safe to say that I'm agnostic." Matthews says. "I think it's very ignorant to say, 'Well, for everything, God has a plan.'"