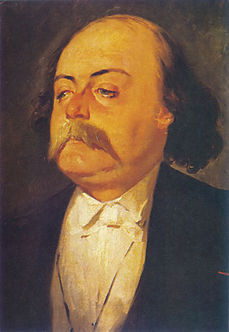 It was on this date, December 12, 1821, that the French novelist of the Realist school, Gustave Flaubert was born in Rouen into a family of doctors. Naturally he began to train for a medical career, but rebelled against that, took up law, failed his exams, and turned to literature. He lived with his mother until he was 50.

Flaubert became a meticulous writer, so that his novels numbered only five. But he received world-wide recognition when Madame Bovary appeared as two volumes in 1857. Or perhaps it was notoriety that won him recognition: Flaubert was tried but acquitted on charges of immorality for the same novel. His anti-clerical feelings, not to say his Atheism, suffuses all of Flaubert's novels, but is especially apparent in his 1874 Temptation of St. Anthony, based on the life of the 4th century cleric but inspired by a Brueghel painting. Flaubert's letters also provide a window on his skepticism.

He died of a cerebral hemorrhage on 8 May 1880. It was Gustave Flaubert who said, "It is necessary to sleep upon the pillow of doubt."*

It was Gustave Flaubert who said, “It is necessary to sleep upon the pillow of doubt.”