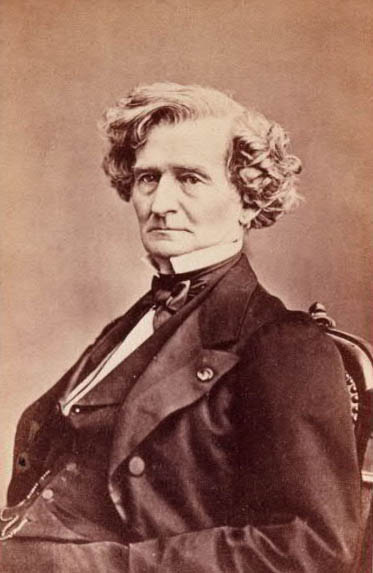 It was on this date, December 11, 1803, that French Romantic composer Louis Hector Berlioz was born in La Côte St. André, Isère. His father, a well-to-do physician, aimed his son toward a medical career, but his son missed the mark when he taught himself harmony and learned the flute and guitar. Berlioz never studied piano, but entered the Paris Conservatoire anyway. He won the Prix de Rome on the fourth try, with its accompanying pension, in 1830.

Berlioz was particularly influenced by the composers Beethoven, Gluck, Spontini and Weber, but also by Shakespeare and the skeptical literature of Byron and Goethe. While a conservatory student, Berlioz fell in love with Irish actress Harriet Smithson, the inspiration for his most famous piece, the Symphonie fantastique. He married her the next year, and while his short-lived marriage was greatly productive musically — Harold in Italy (based on Byron's Childe Harold), Romeo and Juliet, the Grande Messe des Morts (Requiem) and the opera Benvenuto Cellini (based on the subject's autobiography) — the time was personally miserable for Berlioz. His second marriage, to Marie Recio, was happier and equally productive, attesting perhaps to Shakespeare's injunction: "Therefore love moderately: long love doth so..."*

Though brilliant as musical works, his compositions were neither popular nor critical successes, so Berlioz supported himself by writing about music and conducting it. His liturgical compositions, such as the Te Deum, the Grande Messe des Morts, and L'enfance du Christ, are evidence enough for the Catholic Encyclopedia to pronounce Berlioz one of the faithful:

Although Berlioz was a child of his time and in his music gave expression to every passion of man, he did not lose the Catholic sense, as is shown by the attraction liturgical texts had for him, and also by numerous other traits. Thus in his Damnation de Faust he sends Faust to eternal perdition accompanied by most gruesome music, instead of ultimately saving him in accordance with the pantheistic creed of Goethe.**

One might recall the equally gruesome, and wholly secular, music of the Symphonie fantastique, but nevermind. Not only was Berlioz a complete Agnostic — according to his friends, his letters, and his biographer, Katherine F. Boult (1903) — but his choice of material included just as many secular as sacred works. Like the equally Agnostic Beethoven, Berlioz displays much creativity and Romantic passion in his Requiem — yet just as much passion and power are evident in his Roman Carnival (adapted from his opera Benvenuto Cellini), and the operas Les Troyens (a pagan-era epic) and Béatrice et Bénédict (based on Shakespeare). In fact, in the very next passage the Catholic Encyclopedia muses on how orthodox Berlioz might have been, thereby undercutting its own thesis:

Berlioz is one of the most striking examples of modern subjectivism, and the numerous works he has left behind ... give us an idea of what he might have been had he remained faithful to Catholic ideals.**

Berlioz wrote a two-volume set of Mémoires, an idiosyncratic account of musical life in the Paris in his time. In his later years, he suffered a decline, both physical and psychological, and relentless concert and conducting tours sapped his strength. But far from experiencing a spiritual epiphany and reconciliation to the dying off of his close friends as his own end drew near, Berlioz maintained his disbelief in God and immortality. In one of his last letters, written shortly before his death in Paris at age 67, on 8 March 1869, Berlioz wrote his creed: "I believe nothing."†