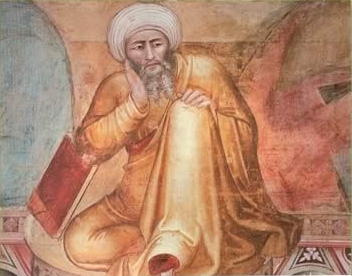 It was on this date, December 10, 1198, that the Spanish Arab-Muslim scholar and philosopher known in the West as Averroës* died in the Andalusian part of what is now Córdoba, Spain. He was born on an unknown date in 1126 in Córdoba, Al Andalus, the grandson of the chief judge of Cordoba, of a family that valued education and public service. His full name was Abū 'l-Walīd Muḥammad bin Aḥmad bin Rushd (Arabic: أبو الوليد محمد بن احمد بن رشد‎), but more simply, Ibn Rushd (Arabic: ابن رشد‎).

Although born and educated in Córdoba, when the Almohads replaced the Almoravids in 1146, Averroës left Córdoba and settled in Seville. Averroës received his medical education from Abu Jafar ibn Harun (d.1180) in Seville. In philosophy, he was the student of Ibn Tufail (Aben Tofail, 1105-1185), Ibn Bajjah (Avempace, ?-1138) and Ibn Zuhr (Avenzoar, 1091-1161). Although Ibn Tufail and Ibn Bajjah were mystic, the philosophical thought of Averroës was thoroughly rationalist.

As was the custom of the time, before Islam became an anti-intellectual religion, people of superior education and achievement became political leaders. Averroës became qadi (judge or governor) of Seville in 1160 and held the position for 20 years.

Averroes' school of philosophy, known to medieval Europe as Averroism, strongly influenced Jewish philosophers such as Maimonides (1135-1204). That Catholic oracle Thomas Aquinas (1225-1274) gave Averroës high marks for philosophical scholarship; Dante (Divine Comedy, Canto IV, c. 1321) hailed him as one of the great philosophers of his age. Averroism remained the dominant school of thought in Europe into the 16th century, especially at Paris University.

As a scholar, Averroës wrote detailed commentaries on the works of Aristotle, adding his own insightful observations and modifications. As such, he was one of the two greatest Arab scholars of the Middle Ages, and perhaps second only to Aristotle in history. However, Averroës had the misfortune to be born into an age when the contemporary Christian culture contained fanatics who burned all his works, and his own (Arab-Muslim) culture was closing the doors on intellectual progress and entering a Dark Age from which it has not emerged to this day. Consequently, the surviving commentaries of Averroës come to us only in Latin, translated from the Arabic originals by Boethius of Dacia.

In addition, Averroës wrote a medical encyclopedia called Kulliyat ("General Rules of Medicine"), known in its Latin translation as Colliget. He also compiled the works of Galen of Pergamon (129-217) and wrote a commentary on Ibn Sina’s The Law of Medicine (Ibn Sina, aka, Avicenna, 980-1037). At a time when dissection was forbidden under Islamic law, though carried out in secret by some of his contemporaries, Averroës stated that the "practice of dissection strengthens the faith."

The biography of Averroës in Wikipedia awards him an overgenerous résumé, as Averroës never distinguished himself outside of medicine, philosophy, Koranic scholarship and Sharia law – and only the first two fields provided any benefit to his fellow human beings.

According to Ernest Renan (Averroes et l'Averroisme, 1852), his works achieved great influence in North Italy following their translation into Latin by Michael Scotus (1194-1250) for Holy Roman Emperor Frederic II. It is clear that Averroës, in his own beliefs, substituted a vague Pantheism or World-Soul for the impersonal God of Aristotle. He did not believe in personal immortality.

* Averroës is pronounced correctly in four syllables, as indicated by the dieresis over the second “e.”