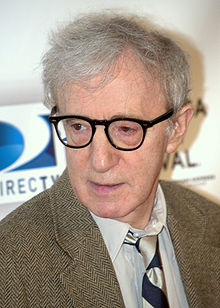 It was on this date, December 1, 1935 that American comedian and film director Woody Allen was born Allen Stuart Konigsberg in Brooklyn, New York. According to his official biography, he was a humorist from age 15, when he started selling one-liners. He graduated high school and spent one semester at New York University before deciding to make a hit with his wit.

Allen worked a time as a stand-up comedian and got his start in film as a writer for the 1965 comedy, What's New, Pussycat? The next year, Allen directed his first feature, What's Up, Tiger Lily? (1966). He has written, directed and/or starred in a film almost every year since. His 1977 breakthrough film, Annie Hall, won four Academy Awards, including Best Picture and Best Director. Allen has written dozens of comedies and dramas in which his sharp, literate wit play freely with the social angst of his persona, and of society at large. And Allen the atheist is never at a loss for words.

Here are just a few lines from his films:

To you I'm an atheist; to God, I'm the Loyal Opposition.
(Sandy Bates: Stardust Memories, 1980)

If it turns out that there is a God, I don't think that he's evil. But the worst that you can say about him is that basically he's an underachiever.
(Boris: Love and Death, 1975)

I can't listen to that much Wagner. I start getting the urge to conquer Poland.
(Larry Lipton: Manhattan Murder Mystery, 1993)

I was thrown out of college for cheating on the metaphysics exam; I looked into the soul of the boy sitting next to me.
(Alvy Singer: Annie Hall, 1977)

Yale: You are so self-righteous, you know. I mean we're just people. We're just human beings, you know? You think you're God.
Isaac Davis: I... I gotta model myself after someone.
(Manhattan, 1979)

Other random one-liners include:

How can I believe in God when just last week I got my tongue caught in the roller of an electric typewriter?
(Without Feathers, 1976)

If only God would give me some clear sign! Like making a large deposit in my name in a Swiss bank.
(Selections from the Allen Notebooks, The New Yorker)

As the poet said, "Only God can make a tree" — probably because it's so hard to figure out how to get the bark on.

Not only is there no God, but try getting a plumber on weekends.
(Getting Even, "My Philosophy")

It's not that I'm afraid to die, I just don't want to be there when it happens.
(Without Feathers, 1976)

On the plus side, death is one of the few things that can be done just as easily lying down.

Eternal nothingness is fine if you happen to be dressed for it.
(Getting Even, "My Philosophy")

Speaking seriously to Rolling Stone in 1987, Allen admitted, "I do occasionally envy the person who is religious naturally, without being brainwashed into it or suckered into it by all the organized hustlers." For a man who claims "Eighty percent of success is showing up," Woody Allen has more Academy Award nominations for writing than anyone else in the business: 14. As for his own philosophy: "There are worse things in life than death," said Allen. "Have you ever spent an evening with an insurance salesman?"

"I was born a heretic," Anthony said. "I always distrust people who know so much about what God wants them to do to their fellows."