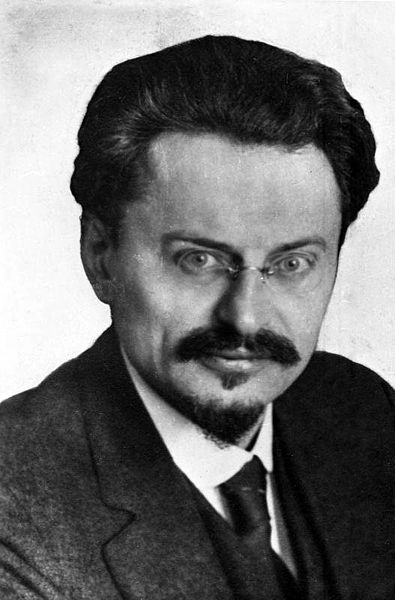 It was on this date, November 7, 1879, that Russian revolutionist Leon Trotsky (Лев Троцкий) was born Lev Davidovich Bronstein (Лев Давидович Бронштейн) in Yanovka, Ukraine, the son of an illiterate but prosperous Jewish farmer. His parents sent young Lev to study in Odessa. He excelled there, read the writings of Karl Marx with enthusiasm, and at age 17 joined the Social Democrats. He was arrested for being a Marxist in 1898, jailed in Odessa, then exiled to Siberia, but escaped to England in 1902 on a forged passport. That passport used the name of a jailer in the Odessa prison, Trotsky, which became his pen-name.

Darwin destroyed the last of my ideological prejudices. ... The idea of evolution and determinism ... took possession of me completely. ... Darwin stood for me like a mighty doorkeeper at the entrance to the temple of the universe. ... I was the more astonished when I read in one of the books of Darwin, his autobiography, I think, that he had preserved his belief in God. I absolutely declined to understand how a theory of the origin of species by way of natural and sexual selection, and a belief in God, could find room in one and the same head.*

Trotsky befriended Lenin and other revolutionists in London and wrote for their journal, Iskra (The Spark). Trotsky and Lenin split in 1903 at the Second Congress of the Russian Social Democratic Labor Party (RSDLP). Lenin led the Bolsheviks, Trotsky was a Menshevik, and Trotsky predicted that Leninism would lead to one-man dictatorship. After participating in the abortive 1905 revolution, Trotsky was elected President of the St. Petersburg Soviet. But he was arrested and sent again to Siberia.

Trotsky again escaped, and at the Fifth Party Congress in London he met Josef Stalin. When the Russian Tsar abdicated in 1917, Trotsky returned to be seated on the Central Committee of the Bolshevik Party, as second in command after Lenin. The next year, as People's Commissar for Military and Naval Affairs, Trotsky built and led the Red Army, virtually through the power of his personality alone.

Lenin became ill in 1922, and died two years later. Stalin wrested power from the natural leader, Trotsky. Fearful of killing the popular Trotsky outright, but jealous of the Red Army's loyalty to him, Stalin banished and then deported him. Being a Communist himself, Trotsky had trouble finding a haven. At last the Mexican artist Diego Rivera made it possible for Trotsky to settle in Mexico, where Rivera lived with his artist wife, Frida Kahlo.

On 20 August 1940, Leon Trotsky was attacked by a Stalinist under orders from the Soviet Union. He died the following day. Had Trotsky's brand of Communism prevailed in Russia, the history of that country would have turned out very differently. But Trotsky witnessed the corrupting influence of the Russian Orthodox Church in political matters. It was for good reason that the Church was suppressed during and after the October Revolution. As Trotsky wrote in his own History of the Russian Revolution (1931-33):

The clergy, following after the nobility, played no small rôle in the formation of the tzarist autocracy, but nevertheless a servile rôle. The church never rose in Russia to that commanding height which it attained in the Catholic West; it was satisfied with the rôle of spiritual servant of the autocracy, and counted this a recompense for its humility. The bishops and metropolitans enjoyed authority merely as deputies of the temporal power.**

Elsewhere, in an essay defending the expropriation of church valuables to alleviate famine, Trotsky wrote,

Religion will only cease to exist completely with the development of the socialist system, that is, when technology frees people from degrading forms of dependency on nature, and amid social relations that are no longer mysterious, which are completely transparent and do not oppress people.†

The glib assertion of a connection between Communism and Atheism shows little understanding of either: the Communists never acted in the name of advancing Atheism, but in advancing a social revolution of which Atheism was but a small part.

"I remember telling you that in the first days of my confinement in prison I acknowledged to myself that had become a Marxist. Darwin destroyed the last of my ideological prejudices. Marx himself I could not secure in the prison. Beltov and Labriola I received later. In the essence of the matter I was already a Marxist outside, but through obstinacy I still defended, against the Marxian epidemic that was spreading among the intelligentsia, my "individuality," a sufficiently ignorant one.

"I communicated the news of my conversion to Svigofsky, being confident that he had gone through a similar process. To my enormous surprise he received my announcement very coldly, and had not the slightest inclination toward Marxism. After that Sokolofsky declared himself a Marxist, as I had. Zif already counted himself a Marxist before the imprisonment.

"In the Odessa prison I felt something like hard scientific ground under my feet. Facts began to establish themselves in a certain system. The idea of evolution and determinism—that is, the idea of a gradual development conditioned by the character of the material world—took possession of me completely.

"Darwin stood for me like a mighty doorkeeper at the entrance to the temple of the universe. I was intoxicated with his minute, precise, conscientious, and at the same time powerful, thought. I was the more astonished when I read in one of the books of Darwin, his autobiography, I think, that he had preserved his belief in God. I absolutely declined to understand how a theory of the origin of species by way of natural and sexual selection, and a belief in God, could find room in one and the same head."
** Leon Trotsky, History of the Russian Revolution, 1931-33, Chapter 1 (Istoriya Russkoy Revolyutsii, 3 vols., translated by Max Eastman). † Marxism, Socialism & Religion: Writings by Karl Marx, Frederick Engels, V.I. Lenin, Rosa Luxemburg and Leon Trotsky, Resistance Books, Sydney, 2001.