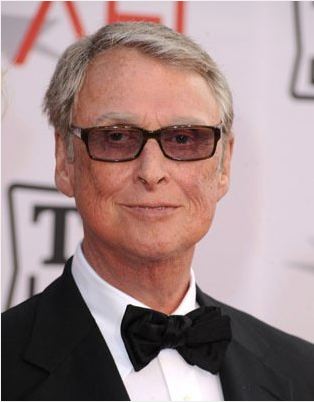 It was on this date, November 6, 1931, that American film director and screen writer Mike Nichols was born Michael Igor Peschkowsky, into a Russian-Jewish family, in Berlin, Germany. The family escaped Nazi Germany just before the outbreak of World War Two and Nichols put himself through the University of Chicago. He studied acting briefly in New York with Lee Strasberg, then returned to Chicago to co-found the comedy troupe Second City. In the 1950s, with partner Elaine May, Mike Nichols developed a clever, satirical, male-female comedy act that made it to Broadway before breaking up in 1961.

Nichols won six Tony awards: five for directing and one for producing on the stage. His debut as a film director came with Who's Afraid of Virginia Woolf? in 1966, starring Richard Burton and Elizabeth Taylor. The next year Nichols scored an Oscar for directing the Dustin Hoffman star vehicle The Graduate. He went on to direct Catch-22 (1970), Carnal Knowledge (1971), Silkwood (1982) and Working Girl (1988). For television, Nichols directed Wit (2001), based on the Pulitzer-prize winning play about a woman with terminal ovarian cancer, and the critically acclaimed and much-awarded miniseries about AIDS, Angels in America (2003).

No stranger to satire on God and religion, dating back to his days of "An Evening with Mike Nichols and Elaine May" (1956-1961), Nichols discussed his 2001 TV-movie Wit in an interview on NPR's "Fresh Air" program admitting that what happens beyond death doesn't concern him:

I've just always assumed that everything just sort-of stops. You know, I'm not one of the people who imagines heaven and hell and so forth. I'm therefore more concerned with what the actual dying is like. Do you bring some courage to it? Can you say goodbye to people properly? Can you accept it and be glad of your life? ... But I don't go on to "afterward."*

In the same interview, Nichols described his idea of immortality after death:

I've found that having children has made a real difference. In some weird way you do feel that you're going to go on. My stepfather died last year and they've been very concerned that he not be forgotten, you know, and worried that nobody's talked or thought about him for awhile now, let's do that. And I agree with them. You know, it's nice when there's somebody around who remembers you.*