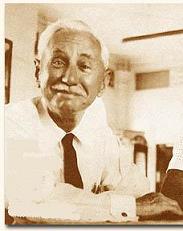 It was on this date, November 5, 1885, that the chief author of The Story of Civilization (11 vols., 1954-1975), William James Durant, was born in North Adams, Massachusetts. The son of devout French-Canadian parents, Will Durant was guided toward a Jesuit education in Jersey City by his mother, but his reading of science and philosophy prompted him to observe,

By the end of my sophomore year, I had discovered ... that Christianity was only one of a hundred religions claiming special access to truth and salvation; and that myths of virgin births, mother goddesses, dying and resurrected deities, had appeared in many pre-Christian faiths. ... I could no longer think of becoming a priest.

After being excommunicated by the New Jersey bishop in 1913, Durant married a student, Ada Kaufman. She took the pen name Ariel, as his co-author on many works, for the length of their long marriage. Durant's major works include his first success, The Story of Philosophy (1926), The Story of Civilization, for which he received a Pulitzer Prize, and The Lessons of History (1968). He also had several of his mini-biographies of philosophers published by E. Haldeman-Julius as five-cent Little Blue Books.

While not dismissive of religion generally — "Even the skeptical historian develops a humble respect for religion, since he sees it functioning, and seemingly indispensable, in every land and age," he wrote in The Lessons of History* — Durant remained a freethinker:

In America, democracy had a wider base. It began with the advantage of a British heritage: Anglo-Saxon law, which from Magna Carta onward, had defended the citizens against the state; and Protestantism, which had opened the way to religious and mental liberty." ... A right is not a gift of God or nature but a privilege which it is good for the group that the individual should have."**

Will Durant died on 7 November 1981, within two weeks of the death of his wife, Ariel (d. 25 October 1981). It was the Durants who wrote, "The greatest question of our time is not communism vs. individualism, not Europe vs. America, not even East vs. West; it is whether men can bear to live without God."†

The Week in Freethought History (December 23-29)