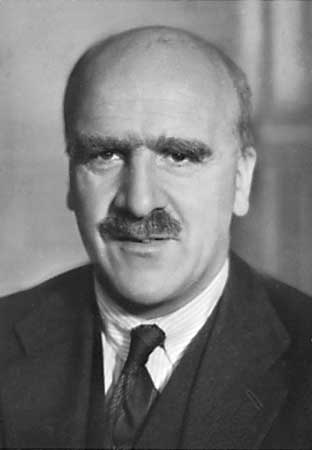 It was on this date, November 5, 1892, that British biochemist and geneticist John Burdon Sanderson Haldane was born in Scotland. Educated at Eton and Oxford, J.B.S. Haldane was not only broadly knowledgeable in science, but he had a well developed social conscience. This led him to follow Marxism for a time (The Marxist Philosophy and the Sciences, 1938), but he became disillusioned with Stalin and abandoned Marxism in the 1940s.

Haldane had great success as a popularizer of science. His book, The Causes of Evolution (1932) managed to synthesize Darwin's theory of natural selection with the genetics discoveries of Gregor Mendel. He made some perceptive predictions in several fields (Daedalus or Science and the Future, 1923), and coined the word "clone."* An idealist in philosophy, Haldane, like his father, John Scott Haldane (1864-1936), was a Rationalist. It was J.B.S. Haldane who said,

Scientific education and religious education are incompatible. The clergy have ceased to interfere with education at the advanced state, with which I am directly concerned, but they have still got control of the children. This means that the children have to learn about Adam and Noah instead of about evolution; about David who killed Goliath, instead of Koch who killed cholera; about Christ's ascent into heaven instead of Montgolfier's and Wright's. Worse than that, they are taught that it is a virtue to accept statements without adequate evidence, which leaves them prey to quacks of every kind in later life, and it makes it very difficult for them to accept the methods of thought which are successful in science.

* This he did in one of his last speeches, Biological Possibilities for the Human Species of the Next Ten Thousand Years (1963). Haldane took the word "clone" from the Greek word for twig [κλΩν].

There is a curious collection of the impious residing eternally in and around Westminster: Ralph Vaughan Williams, Geoffrey Chaucer, Robert Browning, Charles Dickens, John Dryden – and the admittedly agnostic Charles Darwin!