The First Thanksgiving (1621):
A Secular Celebration

It was on this date, November 26, 1941, that U.S. President Franklin Delano Roosevelt signed into law a bill establishing the fourth Thursday in November as Thanksgiving Day in the United States. Although today this thoroughly American holiday is commemorated by church services and family gatherings, and Presidents George Washington (a Deist) and Abraham Lincoln (a skeptic) both issued religious proclamations in honor of the day, amazingly enough, Thanksgiving Day was originally a secular celebration. 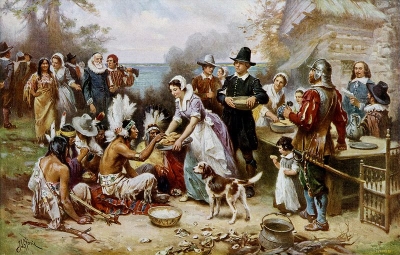 The first Thanksgiving, in honor of a bountiful harvest, was in the fall of 1621 – sometime between September 21 and November 11. It was attended by the 50 surviving Mayflower immigrants, including Myles Standish, as well as 90-some Wampanoag Indians, under Chief Massasoit, including Squanto (or Tisquantum), who spoke fluent English. The Pilgrims of Plymouth colony had a very strict definition of what constitutes a religious holiday: to the Pilgrims, a thanksgiving was a religious holiday for going to church and thanking God for a specific blessing. But the three days of feasting, dancing, singing and game-playing at the first Thanksgiving would not have fit the decorum dictated by Pilgrim piety.

Many cultures and most older civilizations had harvest festivals, and the English of the 17th century were no exception — although they would not have celebrated the fecundity of the earth as older traditions did by demonstrating the fecundity of sexual union! It's a safe bet that there were prayers at the first thanksgiving, but the occasion didn't take on a religious overtone until much later in its history. And those who would complain that the Christian God is being divorced from teaching about Thanksgiving seem quite comfortable is repudiating the god of the Wampanoag Indians, who — except for Squanto, who had been kidnapped a decade earlier, sold into slavery by Christians and forcibly converted — failed to adopt the narrow creed of the Pilgrims.

Whatever became of the thanksgiving day of the Pilgrims up to modern times, the Pilgrims themselves would not have seen Thanksgiving as a Christian holiday. Or particularly holy. While there may have been prayers then, as there are now, the Pilgrims surrounded themselves with the true founders of the feast – not God, but the Native Americans who helped them survive the harsh winter of 1620-1621. The chief virtue of Thanksgiving Day in modern times is that it can just as easily be celebrated without the plastic veneer of piety, if you and yours happen to be happy and healthy. American Freethinkers celebrate Thanksgiving Day simply as a day of gratitude that loved ones can be near and prosperity is at hand. But there is no reason to raise your hands to God when so many of our fellow human beings need a hand!

Geoffrey Chaucer (d. 1400) It was on this date, October 25, 1400, that the first great poet in the English language, Geoffrey Chaucer, died at his home in London. His date of birth is unknown, though it is probably around 1340-1343. Chaucer became a celebrated poet during his lifetime, which did not interfere with his […]