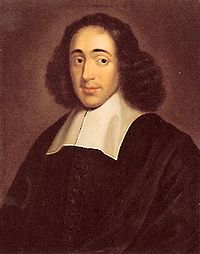 It was on this date, November 24, 1632, that Portuguese-Jewish philosopher Baruch Spinoza was born in Amsterdam to a family settled in Holland. The family were Portuguese crypto-Jews — that is, Jews forcibly converted to Christianity while secretly remaining Jewish. Spinoza was a bright student in the Talmud Torah school and might have become a rabbi. His father died when he was 21, and Spinoza's career path took a sudden turn when his open skepticism about the nature of God, the existence of angels, and the immortality of the soul prompted an attempt to silence him for "monstrous deeds" and "abominable heresies." Failing in that, on 27 July 1656, the rabbis issued on Spinoza a writ of cherem, or excommunication — showing that Jews can be just as intolerant of Freethought as Christians.

Jews were now forbidden to associate with him and, since Christians rarely associated with Jews, anyway, Spinoza was left alone. His alienation caused him to change his name from "Baruch" — in Hebrew bârûkh (ברוך שפינוזה‎ ), meaning "blessed" — to "Benedict" — from Latin benedictus, meaning "spoken well of" or "praised." He left Amsterdam and while in Rijnsburg, Holland, Spinoza began his Treatise on the Emendation of the Intellect (posthumous, 1677), an essay on philosophical method, while supporting himself by freelance teaching. He had turned aside a professorship at Heidelberg University in 1670, saying, "I do not know how to teach philosophy without becoming a disturber of established religion."[1] Spinoza also learned and practiced the trade of lens grinding, the side effect of which was long-term, and eventually fatal, inhalation of glass dust.

Even in relatively tolerant Holland, Spinoza was persecuted. He was accused of being an Atheist, yet defended by statesman Jan de Witt, who was killed by a mob for his efforts. Spinoza's religious ideas comprised a nuanced redefinition of God which more closely resembled Pantheism. He agreed with Descartes' sharp distinction between matter and spirit, but claimed these as "attributes" of one being which he called God.

In 1663 Spinoza left Rijnsburg and moved near The Hague, where he wrote and published anonymously his Theologico-Political Treatise (Tractatus Thologico-Politicus, 1670), a defense of free expression in the face of religious and political interference. In this work, he writes, "How blest would our age be if it could witness a religion freed from all the trammels of superstition!"[2] and "Philosophy has no end in view save truth; faith looks for nothing but obedience and piety."[3] He also wanted to publish a work on Ethics but, he lamented in a letter to a friend, "The theologians were lying everywhere in wait for me."[4] Indeed, his Ethics was only published posthumously, when he was safe from the consequences of making statements such as this one:

Those who wish to seek out the cause of miracles, and to understand the things of nature as philosophers, and not to stare at them in astonishment like fools, are soon considered heretical and impious, and proclaimed as such by those whom the mob adores as the interpreters of nature and the gods. For these men know that once ignorance is put aside that wonderment would be taken away which is the only means by which their authority is preserved.[5]

Benedict Spinoza died on 21 February 1677, at age 44, of tuberculosis aggravated by inhaling glass dust from his work at lens-grinding. It was Spinoza who said, "[T]he ministries of the Church are regarded by the masses merely as dignities, her offices as posts of emolument — in short, popular religion may be summed up as respect for ecclesiastics."[6]

[1] Spinoza, letter to friend, on being offered a chair at Heidelberg, as quoted in James A. Haught, 2,000 Years of Disbelief, 1996. [2] Spinoza, Theologico-Political Treatise, 1670, Chapter 11. [3] Ibid., Chapter 14. [4] Spinoza, letter to German theologian and teacher Henry Oldenberg, on why he "determined to put off publishing till I saw how things were going," The full quote reads, "When I became aware of this [the clerical abuse of his opinions and writings] through trustworthy men, who also assured me that the theologians were everywhere lying in wait for me, I determined to put off publishing till I saw how things were going, and I proposed to inform you of my intentions. But matters seem to get worse and worse, and I am still uncertain what to do." In the same letter Spinoza complains that rumors were circulating "that I had in the press a book concerning God, wherein I endeavored to show that there is no God." [5] Spinoza, Ethics, 1677 (posthumous), Appendix. The text of Spinoza's other great posthumous work, Treatise on the Emendation of the Intellect, is also available online. [6] Spinoza, Theologico-Political Treatise, 1670, Chapter 1. The full quote reads, "(23) I have often wondered, that persons who make a boast of professing the Christian religion, namely, love, joy, peace, temperance, and charity to all men, should quarrel with such rancorous animosity, and display daily towards one another such bitter hatred, that this, rather than the virtues they claim, is the readiest criterion of their faith. (24) Matters have long since come to such a pass, that one can only pronounce a man Christian, Turk, Jew, or Heathen, by his general appearance and attire, by his frequenting this or that place of worship, or employing the phraseology of a particular sect — as for manner of life, it is in all cases the same. (25) Inquiry into the cause of this anomaly leads me unhesitatingly to ascribe it to the fact, that the ministries of the Church are regarded by the masses merely as dignities, her offices as posts of emolument — in short, popular religion may be summed up as respect for ecclesiastics."