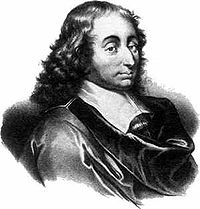 It was on this date, November 23, 1654, that French mathematician and religious philosopher Blaise Pascal had his famous religious conversion. The story goes that on the proverbial dark and stormy night, while Pascal was riding in a carriage across the Neuilly bridge in the Paris suburb, a sudden fright caused the horses to bolt, sending them over the edge. Somehow, the carriage, bearing Pascal, was miraculously spared. If this was indeed the hand of God in Pascal's life, it must be admitted that it was a little hard on the horses! And it is probably only coincidence that 109 years before Pascal's traumatic event, and again 53 years before it, the painters Michelangelo (1545) and Caravaggio (1600) painted scenes using the medieval convention of representing pride as a falling horseman — in their respective paintings of the conversion of Saul to Saint Paul.

Pascal took the incident as a sign and on this date self-converted from mathematician and physicist to religious philosopher. That is, he left behind his useful contributions to humanity — research into the natural sciences, construction of a mechanical calculator, development of number theory, study of hydrostatics, and clarification of concepts such as pressure and vacuum — in favor of disorganized musings on religious experience and man's relationship to God that was published only after his death. That work, of course, was called Pensées or Thoughts. Pascal told no one about his religious experience or his collected Thoughts before he died.

A champion of Christian apologetics to some, Pascal in fact retreated from rational thought because he came to believe that empiricism was unequal to the task of discerning Deeper Truth. "The heart has reasons that reason does not know," he famously said, and, "God is perceived by the heart, not by the reason." This is not as logically deficient as his famous Wager, because Pascal had not the benefit of modern psychology, which pretty much settled the question in favor of the material nature of "heart" and "mind."

What is rarely mentioned in apologist appreciations of Pascal is that he lived most of his adult life in great pain and was troubled by migraines from his youth. What eventually killed him at the young age of 39 was a painful stomach cancer that spread to his brain. The evening of his "definite conversion" (November 23) is what Pascal called a "night of fire." This was the occasion of what Pascal remembered as a two-hour mystical vision, but what might just have been a misinterpretation of the aura and shimmering lights that occasionally precede a migraine headache. Some of the common triggers for migraines are being tired, stressed or depressed and the let-down after a stressful event — like nearly falling off a bridge.

Speculation? Of course. All we really know is Pascal's writings. We can only infer his mental state from reports of his chronic ill health. But if God were speaking to the unconverted through Pascal, could he not have done so without killing horses and prematurely extinguishing a towering intellect? As Percy Bysshe Shelley once asked, "If God has spoken, why is the world not convinced?" Pascal is a classic example of a great intellect perverted by conversion — a light going out so that he may help an all-powerful being change the minds of the humans he (presumably) created with minds of their own.

To put the question another way, if God intends to bring us to the Christian religion, why does he leave it to the puny efforts of mere men when he could convince us all with a wink of his Almighty Eye?*

Perhaps God is saving his energy to stoke the fires of hell?

* Or, as ex-priest and historian Joseph McCabe (d. 1955) put it, "The clergy of all denominations share our zeal for reconstruction today and loudly announce a campaign to bring the world back to God. I have not yet encountered the religious writer who explains why God leaves it to their puny efforts to do this. According to them he could convert New York in a day by making, for instance, the Statue of Liberty take a stately walk around the waters of the Harbor or bidding the Empire State Building stand on its head for an hour. And this would clear his servants of the suspicion of evil minds that in their zealous campaign they have too much thought of their own treasuries."

Note: Pascal converted 300 years to the day before this writer was born. This post was originally published November 23, 2004.

The Week in Freethought History (December 16-22)

Here’s your Week in Freethought History: This is more than just a calendar of events or mini-biographies – it’s a reminder that, no matter how isolated and alone we may feel at times, we as freethinkers are neither unique nor alone in the world. Last Sunday, December 16, but in 1770, German composer Ludwig van […]