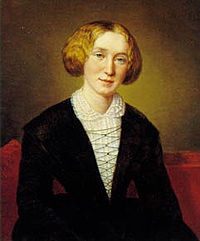 It was on this date, November 22, 1819, that English Victorian novelist Mary Ann Evans, who rose to fame under the pen-name "George Eliot," was born in Chilvers Coton, Warwickshire. She developed a strong religious sense under the teachers at Mrs. Wallington's School at Nuneaton, and early on published some religious poetry. Her hunger for reading and learning led her to master Greek, Latin, Italian, and German after leaving school. Evans attended church, out of respect for her family, only until her father died in 1849, but concluded of Christianity, "It is time the clergy are told that thinking men, after a close examination of that doctrine, pronounce it to be subversive of true moral development and, therefore, positively noxious."[1]

She met the freethinking manufacturer Charles Bray, whose wife was the sister of Charles Hennel, author of An Inquiry Concerning the Origin of Christianity (1838). After reading this and other Rationalist works, Evans said, "God, immortality, duty — how inconceivable the first, how unbelievable the second, how peremptory and absolute the third."[2] In 1844 Evans translated and published David Friedrich Strauss's strongly skeptical Life of Jesus (1844-6).

Then, in 1851, Evans joined the staff of the Westminster Review, wrote many book reviews, and joined a circle of brilliant Victorian writers, including George Henry Lewes, who would be her companion — his wife was mentally ill, so he could not marry — until Lewes's death. Her extra-marital association with Lewes raised some Victorian eyebrows, even though it was his wife who bore two children by adulterous liaisons, but otherwise was salutary for her career as a writer: she published a collection of tales called Scenes from Clerical Life in 1858, but as writing was at the time considered a man's profession, Evans used for the first time the pseudonym by which she has since become famous: George Eliot.[3] George Eliot went on to write Adam Bede (1859), The Mill on the Floss (1860), Silas Marner (1861), Romola (1863), and Daniel Deronda (1876).

However, Eliot's 1872 novel Middlemarch is considered her masterpiece. Henry James pronounced it a "treasure-house of detail." Although the character Dorothea does not have the modern feminist courage to give up an unsatisfactory marriage, Eliot unquestionably believes that women are not intellectually or morally inferior to men.

Eliot was an Agnostic, declaring "The old religion said 'Heaven help us!' Our new one, from its very lack of that faith in a heaven, will teach us all the more to help one another."[4] And in an essay ridiculing the work of evangelism, Eliot wrote,

Minds fettered by this doctrine no longer inquire concerning a proposition whether it is attested by sufficient evidence, but whether it accords with Scripture; they do not search for facts as such, but for facts that will bear out their doctrine. It is easy to see that this mental habit blunts not only the perception of truth, but the sense of truthfulness, and that the man whose faith drives him into fallacies treads close upon the precipice of falsehood. ... So long as belief in propositions is regarded as indispensable to salvation, the pursuit of truth as such is not possible.[5]

When George Henry Lewes died in 1878, it was as if Eliot's muse had left the earth. In 1880 she married a banker named J.W. Cross and never published another novel. Only one time did she publish under her own name: her 1854 translation of Ludwig Feuerbach's Essence of Christianity had "Marian Evans" on the title page.

Although many remarked that she was plain looking, Eliot possessed a "low, well-modulated, musical voice, which impressed everyone who knew [her] in later years."[6] According to the liberal Rev. Dr. Benjamin Jowett, Eliot was "the gentlest, kindest, and best of women."[7] George Eliot, died on 22 December 1880. Refused burial in the Poet's Corner of Westminster Abbey, on account of her well-known Agnosticism, she was buried instead in Highgate Cemetery, London, next to George Henry Lewes, her "spiritual husband."

This Week in Freethought History (September 8-14)