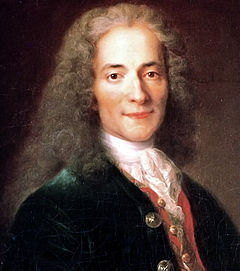 It was on this date, November 21, 1694, that French writer François-Marie Arouet, who became famous as Voltaire, was born in Paris. His education began under a skeptical French Jesuit. When his father, a notary, insisted that he study for the law, Arouet instead began a literary career. After he published a witty satire on the Prince d'Orleans, a notorious scoundrel, he was exiled in 1716. Placed in the Bastille the next year, Arouet adopted the pen name Voltaire and wrote his first play. He was exiled yet again in 1719, and imprisoned in the Bastille again in 1726.

In 1733, on returning from England, he published his Philosophic Letters on the English, which compelled him to leave France yet again after being burned by the hangman. The "arch-mocker," as the clergy dubbed him, spent most of the rest of his life exiled from Paris. He spent some time in the court of Frederic the Great, a kindred spirit — "Christianity is the most ridiculous, the most absurd and bloody religion that has ever infected the world," he wrote in a letter to Frederick. In 1758 he finally settled where he could easily escape across the French border should the need arise: Ferney. There he lived the last 20 years of his life, defending free thought and free speech. "Liberty of thought is the life of the soul," he wrote in his Essay on Epic Poetry (1727).

In Ferney he also wrote some of his best works: Candide (1759), Treatise on Toleration (Traité sur la tolérance, 1763), and his Philosophical Dictionary (Dictionnaire philosophique, 1764). His complete works fill 52 volumes. And Voltaire was "honored" several times by having his works placed on the Catholic Index of Prohibited Books. Here are some random quotes from Voltaire's Philosophical Dictionary:

The truths of religion are never so well understood as by those who have lost the power of reasoning. ... Among theologians, heretics are those who are not backed with a sufficient array of battalions to render them orthodox. ... Atheism is the vice of a few intelligent people. ... Which is more dangerous, fanaticism or atheism? Fanaticism is certainly a thousand times more deadly; for atheism inspires no bloody passion, whereas fanaticism does. ... Fanaticism causes crimes to be committed ... Christians have been the most intolerant of all men. ... Nothing can be more contrary to religion and the clergy than reason and common sense. ... With regard to the Christians, assuredly their greatest and most venerable saints were those whose brains had sustained the severest shock. ... Whenever an important event, a revolution, or a calamity turns to the profit of the church, such is always signalized as the Finger of God.

All his life Voltaire was a Deist, with no belief in immortality or free will, as he wrote in Il faut choisir (1772). He only became more skeptical as the end of his life approached, and the clerical claims that he died pining for a priest are false — in fact, he refused one when offered. All he would say was, "I die adoring God, loving my friends, not hating my enemies, and detesting superstition." Indeed, he wrote in a letter to M. Damiliville (16 May 1767), "I have never made but one prayer to God, a very short one: 'O Lord, make my enemies ridiculous.' And God granted it."

After Shakespeare, Voltaire is the most famous writer in history. He died a Deist on 30 May 1778. His enemies in the church tried to prevent a decent burial. After the fall of Napoleon, Catholic fanatics removed his remains from the Panthéon and dumped them in an anonymous pit outside Paris, as if to vindicate Voltaire's words (attributed), "Anyone who has the power to make you believe absurdities has the power to make you commit injustices." The world has forgotten all of their names.