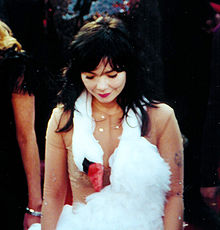 It was on this date, November 21, 1965, that Icelandic vocalist Björk Guðmundsdóttir, know around the globe as Björk, was born in Reykjavik. Her musical influences included jazz, rock, and classical music, plus the songs, sagas and poetry of Iceland. She was sent to music school at the age of 5, and by age 11 Björk had released her first album. She got involved in punk music, then helped launch the groundbreaking Icelandic pop band the Sugarcubes in the 1980s.

Björk went solo with her 1993 album named, appropriately, Debut. This was followed by Post (1995); Telegram (1996); Homogenic (1997); Selmasongs, for the 2000 film Dancer in the Dark; Vespertine (2001); a Greatest Hits album in 2002; Gling-Gló (2003). Her 2011 album, Biophilia, was the first album to be released as a series of interactive apps, which were then included in the collection of New York's Museum of Modern Art. With 30 singles reaching the Top 40 on pop charts around the world, Björk has won four BRIT Awards, four MTV Video Music Awards, three UK Music Video Awards and 21 Icelandic Music Awards. Her voice, music and performing persona have been described as ethereal, pixieish and alternately delicate and intense.

Björk's film debut, as a single mother going blind, scratching a living while saving for an operation to spare her son the same fate, was in Dancer in the Dark, released in 2000 as a Dogma 95 work. The effort won Dancer in the Dark the award for Best Picture at Cannes, and Björk captured the Best Actress award. Singing on the Dancer in the Dark soundtrack, her character, Selma, wishes she could protect her child from life's pain, but she can't make life easier: "You are gonna have to find out for yourself," she says.

In a 1994 HotPress article entitled "Björk on the Wild Side," interviewer Liam Fay asks her, "Who does Björk pray to?" Björk replies,

I've got my own religion. ... Iceland sets a world-record. The United Nations asked people from all over the world a series of questions. Iceland stuck out on one thing. When we were asked what do we believe, 90% said, "ourselves." I think I'm in that group. If I get into trouble, there's no God or Allah to sort me out. I have to do it myself."

In a 1995 interview in the magazine Les Inrockuptibles, interviewer Neil Hannon asked, "Do you believe in God?" Björk replied, "I do not believe in religion, but if I had to choose one, it would be Buddhism. It seems more livable, closer to men."** However, in her song "Alarm Call," from her 1997 album Homogenic, there are these lines:

I'm no fucking Buddhist
But this is enlightenment.

It was in the September 1997 issue of Raygun that Björk revealed more of her admiration for Buddhism. Asked if she enjoyed her performance at the Tibet Festival, Björk replies, "I did, but I've been reading about reincarnation, and the Buddhists say we come back as animals and they refer to them as lesser beings. Well, animals aren't lesser beings, they're just like us. So I say fuck the Buddhists."

Björk's lyrics are firmly rooted in the physical-emotional world of love and life. She mentions the devil in the song "Unravel," and heaven in the song "New World," but only figuratively. In the song "Aurora" she mentions the Roman goddess of the dawn, but not in a mystical, superstitious sense. In her DVD documentary Björk: Inside Björk, the singer admits that she once described herself as an atheist, but realized she did have a Pantheistic regard for Nature. Like many musicians and poets, she finds no inspiration in Christianity, or even in a personal god: Bjork's inspiration seems to come from the earth, not the cosmos.