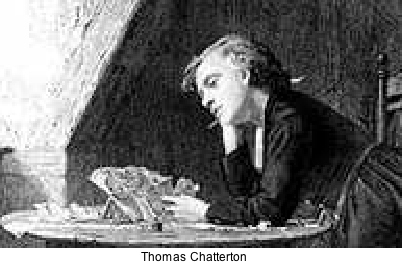 It was on this date, November 20, 1752, that the poet generally regarded as the first Romantic poet in English, Thomas Chatterton, was born in Bristol, the posthumous son of a local schoolmaster. Poverty and rejection were the story of his life, but in the brief 17 years of his existence, Chatterton forged mediæval poetry and prose of such quality — the "Rowley Poems" — that it deceived even Horace Walpole.

It is true that Chatterton used theistic language in some of his poems, but from his satirical "Last Will and Testament" (1770) we find these lines:

I also leave my religion to Dr. Cutts Barton, Dean of Bristol, hereby empowering the Sub-Sacrist to strike him on the head when he goes to sleep in church. My powers of utterance I give to the Reverend Mr. Broughton, hoping he will employ them to a better purpose than reading letters on the immortality of the soul. I leave the Reverend Mr. Catcott some little of my free thinking, that he may put on spectacles of reason and see how vilely he is duped in believing the scriptures literally.*

Chatterton was too proud to accept charity and too depressed at the poor payment for his poetry by leading London publishers. On 24 August 1770, he poisoned himself by drinking arsenic in water. Too late, Burns, Keats, Shelley, Byron, Coleridge and other poets declared him a genius and a prodigy. Thomas Chatterton had written to his family shortly before his death, "I am no Christian."**

* "Chatterton's Will," Easter Eve, 17 April 1770. Selected Chatterton poems can be found online at this link. The commentator at the Web site ("Anne") notes, "Interesting that he did not go to church for God, but to admire the ancient architecture and the memorial stones." ** David Masson, Chatterton: A Story of the Year 1770, London: Macmillan,1874.

I grew up super-religious. ... And I’m now an atheist. And the reason why I’m an atheist is because of education. ... I made my own decision because I was empowered to do so.