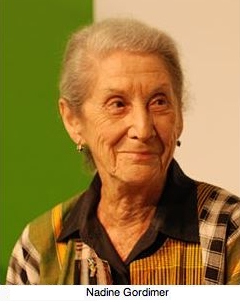 It was on this date, November 20, 1923, that South African novelist and short-story writer Nadine Gordimer was born the daughter of a Jewish-Lithuanian emigrant in Springs, outside of Johannesburg. Gordimer was educated in a convent school and spent a year at university, but took no degree. Her first short story was published when she was fourteen. She made her reputation on novels set in South Africa and dealing with racial and moral issues in the changing social, moral, and political ravages of apartheid there.

Gordimer was a founding member of Congress of South African Writers. She won the Booker Prize (1974) and the 1991 Nobel Prize in literature. In her 1991 Nobel lecture, Gordimer makes a brilliant if veiled charge, using theistic language, that writers are more powerful with their words than religions are with their dogmas. While rejecting Liberalism, her novels also offer no hope of help from God. Nadine Gordimer is an Atheist.*

* According to the Celebrity Atheist Web site and "Justice in the Interregnum? Law, Politics and Society in Selected Novels of Nadine Gordimer," by Thomas Patrick Gannon, in Legal Studies Forum, Volume 15, Number 2 (1991).

Read about Francis Xavier, Buddha, musical satirist Tom Lehrer, the ASPCA vs. Christian animal cruelty, the last execution for witchcraft in Germany, Mahavira – the most famous leader of Jainism, Christopher Hitchens and more …