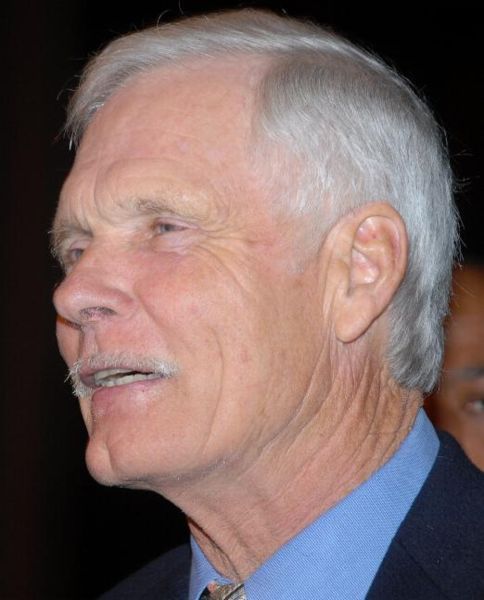 It was on this date, November 19, 1938, that American media mogul and philanthropist Ted Turner was born Robert Edward Turner III in Cincinnati, Ohio. Turner grew up in Savannah, Georgia, and Chattanooga, Tennessee. He started building his media empire at age 24, after his father Ed put a gun to his head and left him a billboard business.

Turner eventually founded the Cable News Network, CNN, the groundbreaker for 24-hour news programming brought to preeminence during the 1991 Iraq War. He is also well known as the "hands-on" owner of the Atlanta Braves and Atlanta Hawks, purchased in 1976, for his $1 billion pledge to support the United Nations and for creating the Goodwill Games in 1986. He was named "Humanist of the Year" in 1989.

But perhaps, after being forced out of broadcasting in a merger reorganization, Turner is best known for his failed marriage to Academy Award-winning actress Jane Fonda. It is generally agreed that the reason was Fonda's conversion to born-again Christianity. "She just came home and said 'I've become a Christian,' " Turner said. "Before that, she was not a religious person. That's a pretty big change for your wife of many years to tell you. That's a shock."

Turner says he gave up religion after his teenage sister Mary Jane died of lupus and his father killed himself. Consequently, he rarely misses an opportunity to say something scandalous about religion, for which he later apologizes, only to say something controversial again! For example, at a 1997 baseball news conference, in the wake of the Heaven's Gate mass suicide in California, Turner called this "a good way to get rid of a few nuts."*

It's hard to doubt his sincerity, even if Turner can't be counted on for consistency. "Christianity is a religion for losers," Turner once famously said in a 1990 speech to the American Humanist Association. But when he produced the 2003 TV movie Gods and Generals, about the religious influences on two famous Civil War generals, Turner denied his Atheism, saying that he's read the Bible from cover to cover more than once, and that he "was born again seven times, so one of them is bound to take."**

He sponsored a world religion conference at the United Nations in 2000, but then took that opportunity to denounce the Christian faith of his childhood as false and intolerant. One Christian observer described the speech as "the most blasphemous thing I have ever heard in my life." Turner ridicules the idea of "hell," believes "nature is god" and rejects the biblical concept of creation, saying, "basically we are chimpanzees with about two percent more intelligence and a little less hair..." Though somewhat uncomfortable with Atheism, Ted Turner can hardly be called a Christian.

Wrote Thomas Jefferson, “I know that Gouverneur Morris, who pretended to be in his secrets and believed himself to be so, has often told me that General Washington believed no more in [Christianity] than he did.”