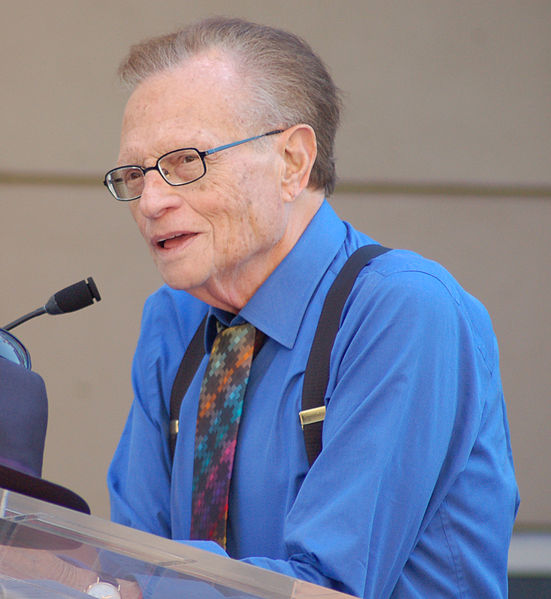 It was on this date, November 19, 1933, that award winning American broadcaster Larry King, host of TV's "Larry King Live" interview show, was born Lawrence Harvey Zeigler in Brooklyn, New York, the offspring of Orthodox Jews who had emigrated from Russia. Young Larry was so close to his father, that when he died of a heart attack at age 43, he was furious that his father was taken from him. He has been an agnostic ever since, saying "Even though I'm a very forgiving person, if there is a God, I'd have a tough time forgiving Him."[1]

Larry King got his broadcasting name from a Miami station manager who thought Zeigler sounded too ethnic. His first broadcast was from Miami in 1957. King gradually grew to local, and then national talk-show stardom, with an interview show on the Mutual Radio Network that ran from 1978-1994. Moving to television, his CNN show started in June 1985. Over the years, King has interviewed some 40,000 guests, winning the Peabody Award for Excellence in broadcasting for both his radio (1982) and television (1992) shows, as well as 10 Cable ACE awards for Best Interviewer and for best Talk Show Series. King once quipped that if he could land an interview with God himself, he'd ask him one simple question, "Did you have a son?"[2]

King gave $1 million to George Washington University's School of Media and Affairs for scholarships and founded the Larry King Cardiac Foundation. Once asked why he was so afraid of death, he responded that when he had his own heart attack, there was no bright light at the end of the tunnel: "I know this is it," he said.[3] King co-authored a 1998 book (with Rabbi Irwin Katsof) entitled Powerful Prayers, but says he's not convinced of the efficacy of prayer, and the only thing he's ever prayed for was for the Dodger's to win a game.[4]

After talking to so many people on so many subjects, Larry King told a German magazine that, yes, he can always learn something new. "Nearly every time. With one exception — if it comes to religious topics everything is already said. I am an agnostic, so I don't learn anything from them. But most of the time it's exciting."[5]

“Christian religion ... has been and still is the principal enemy of moral progress in the world. ... Religion is based, I think, primarily and mainly upon fear.”