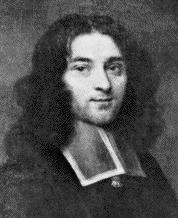 It was on this date, November 18, 1647, that French writer and philosopher Pierre Bayle was born in Carla-le-Comte in the foothills of the Pyrenees, the son of a Protestant minister. In his youth he weighed the merits of Catholicism and Protestantism and apparently chose the wrong team. When the king expelled the Huguenots from France in 1685, after the revocation of the Edict of Nantes, Bayle was among them. He thereafter made his home in Holland.

The work for which Bayle is chiefly known, his Dictionaire historique et critique (Historical and Critical Dictionary), began appearing in 1696. Its articles were not as consequential as the illustrative commentaries the author provided. Because his reason pierced the current theological fabrications and fantasies, the Dictionaire was condemned both by the Protestants and by the Roman Catholic Church.

Bayle was too prudent to criticize God and immortality directly, but his deft assessments and keen wit made the Dictionaire a standard reference for Rationalists. It is generally assumed that only an Atheist could write with such tolerant words for religious diversity and such an irreverent reality check on the doctrines of Christianity. Pierre Bayle died in Rotterdam on 28 December 1706.

* Bayle's Dictionaire historique et critique can be found at this link.