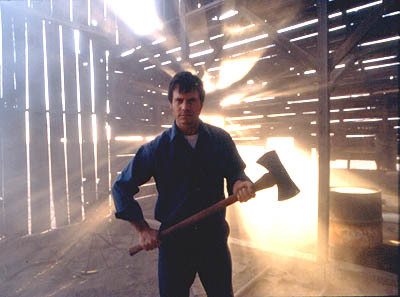 It was on this date, November 17, 2001, that the directorial debut of film actor Bill Paxton, entitled Frailty, was first viewed at the Deep Ellum Film Festival, Texas. Paxton, who played "Dad," was born in Texas, as were his co-stars, Matthew McConaughey, playing the character introduced as Fenton Meiks, and Powers Boothe, playing FBI Agent Wesley Doyle. Its nationwide release was on 12 April 2002.

Frailty begins with the son of "Dad" Meiks (McConaughey) introducing himself to FBI Agent Doyle (Boothe) and claiming to know the identity of the "God's Hand" serial killer Doyle has been tracking. There follow extended flashbacks in which the peaceful-yet-troubled Meiks relates to Doyle how, when he was a pre-teen, his father was visited by an angel who gave him a list and a mission: to destroy demons masquerading as human beings. And the tool of his trade is an axe.

When "Dad" confronts Fenton's doubts, he hardly reassures his son: "Only demons should fear me. And you're not a demon are you?" Could "Dad" sacrifice his own son? Remember God asked Abraham to sacrifice Isaac (Genesis 22).

The murders are all off-screen because Frailty is a story about religious fanaticism. Paxton directs this story by Texas-born Brent Hanley with a fearlessness that allows him to follow the logic of the zealot to its inevitable conclusion. To cover up the destruction of a demon, "Dad" has to kill a witness, but he blames his non-believing son:

Dad: Do you see what you made me do? You made me commit murder-
Young Fenton: I didn't make you do anything. You did! You're crazy!

As punishment for his skepticism, "Dad" raises his hand to his son, saying "You didn't think anyone knew about that, did you? But God saw you! And you can't escape God's wrath!" But instead of striking Fenton, "Dad" forces him to dig a pit under the garage, then confines him there until Fenton hears from God. Of course he does, just as the medieval torture victims confessed as the torturers wanted them to — but only so the agony would stop.

If all of this rank child abuse sounds like unrealistic Hollywood hype, bear in mind that, in the same year (2001), Andrea Yates believed she was possessed by the devil, and that only by drowning her children could she save them. The film Frailty carries the point to its perverse end: if you believe God speaks to you, how can you disobey him? By its own logic, no matter how immoral your actions may seem to someone who didn't experience the visions, if it's God's will, it can't be wrong.

Hence "Dad's" protestation to his skeptical son, "I never killed a man in my whole life!" And since “Dad” (and only “Dad”) sees the true demons — if God indeed speaks to mankind — we are left wondering that he might after all be right. At the end, the film reveals two more surprises: the true identity of the Matthew McConaughey character and the real reason he seeks out Agent Doyle.

The situations, and the portrayals of psychological torment, are frighteningly realistic. As critic Roger Ebert wrote in his review of Frailty, "Heaven protect us from people who believe they can impose their will on us in this world because of what they think they know about the next."* With all due respect to the late Mr. Ebert — whether they be a crazed Jim Jones or a comparatively sane Pat Robertson — protection from religious fanatics will not come from the sky!