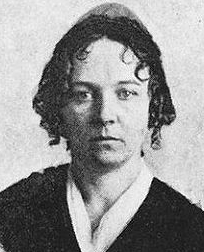 It was on this date, November 12, 1815, that feminist pioneer Elizabeth Cady Stanton was born in Johnstown, New York, the daughter of a lawyer. As a girl she flirted briefly with fundamentalism, but her father nipped that in the bud. As Stanton recalled, his instruction "disabused my mind of hell and the devil and of a cruel, avenging God, and I have never believed in them since."[1] She studied law under her father, who later became a New York Supreme Court judge. During this period she became a strong advocate of women's rights. In 1840 Elizabeth Cady married the lawyer, Henry Brewster Stanton, who drew her into the US anti-slavery movement.

Stanton, her husband and Lucretia Mott traveled to London as delegates to the World Anti-Slavery Convention. "In the darkness and gloom of a false theology," Stanton wrote of meeting the great American abolitionist there, "I was slowing sawing off the chains of my spirit-bondage when, for the first time, I met [William Lloyd] Garrison in London. A few bold strokes from the hammer of his truth and I was free."[2] But Stanton and Mott, like their British sisters, were refused permission to speak at the convention. "We resolved," Stanton later wrote, "to hold a convention as soon as we returned home, and form a society to advocate the rights of women." This she did in 1848.

Stanton grew to use the term "Nature" interchangeably with "God" in her speeches, observing that "The Bible and the Church have been the greatest stumbling blocks in the way of women's emancipation."[3] In collaboration with the more moderate Susan B. Anthony, Stanton wrote a History of Woman Suffrage (4 vols., 1887-1902), which is highly critical of the churches. Of the Bible she wrote,

I found nothing grand in the history of the Jews nor in the morals inculcated in the Pentateuch. Surely the writers had a very low idea of the nature of their god. They made him not only anthropomorphic, but of the very lowest type, jealous and revengeful, loving violence rather than mercy. I know of no other books that so fully teach the subjection and degradation of women.[4]

In an article entitled "What has Christianity Done for Women?" Stanton replied decidedly: Nothing.[5] In 1895 she edited an expurgated Woman's Bible, in which she wrote approvingly of the changes brought by modern life, when "rationalism took the place of religion and reason triumphed over superstition." Late in her life, Stanton wrote,

I can say that the happiest period of my life has been since I emerged from the shadows of superstitions of the old theologies, relieved from all gloomy apprehensions of the future, satisfied that as my labors and capacities were limited to this sphere of action, I was responsible for nothing beyond my horizon, as I could neither understand nor change the condition of the unknown world. Giving ourselves, then, no trouble about the future, let us make the most of the present, and fill up our lives with earnest work here.[6]

And in her 1898 autobiography, Stanton deplored that "the religious superstitions of women perpetuate their bondage."[7]

Elizabeth Cady Stanton died on 26 October 1902, before the dream of woman suffrage was realized in the US. After her death, her daughter, Margaret Stanton Lawrence, recalled,

We children have only pleasant memories of a happy home, of a sunny, cheerful, indulgent mother, whose great effort was to save us from all the fears that shadow the lives of most children. God was to us sunshine, flowers, affection, all that is grand and beautiful in nature. The devil had no place at our fireside, nor the Inferno in our dreams of the future.[8]