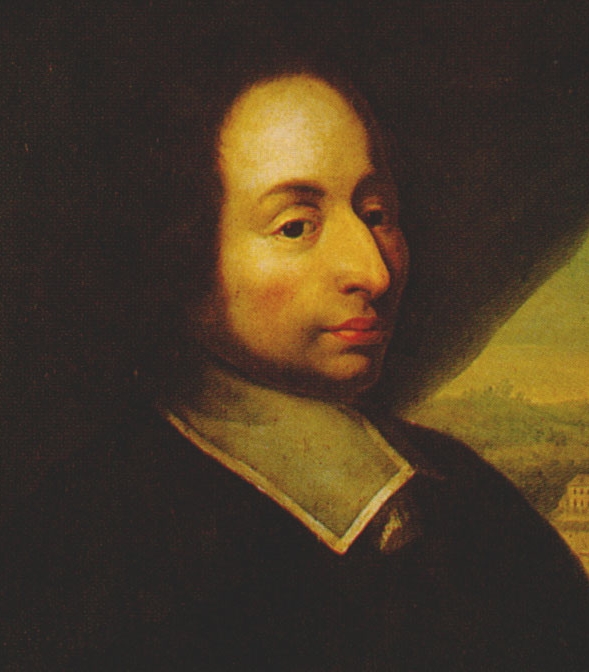 It was on this date, June 19, 1623, that French mathematician and philosopher Blaise Pascal was born at Clermont-Ferrand. He was always in ill health, so it is tempting to attribute his preoccupation with the afterlife and God to being so close to finding out for himself. He was a contemporary of René Descartes and was ten when Galileo was forced to recant his belief that the earth circled the sun. He and Thomas Hobbes lived in Paris at the same time (1640) including the year Hobbes published his Leviathan (1651). Together with Pierre de Fermat, Pascal created the calculus of probabilities.

Pascal wrote a series against the Jesuits in 1657 called Provincial Letters, which also attacked orthodox arguments for religion. But a near-fatal carriage accident on 23 November 1654 — less than eight years before his death — persuaded him to turn his intellect finally toward God. So Pascal is chiefly remembered for his Pensées sur la religion or Thoughts on Religion, which was published posthumously (1870).

Pensées was a defense of the Christian religion, and in it Pascal makes his famous Wager, which is not as clear in his language as in this summary: "If God does not exist, the Atheist loses little by believing in him and gains little by not believing. If God does exist, the Atheist gains eternal life by believing and loses an infinite good by not believing."* So, il faut parier: we must choose.

While the argument at first seems inescapable, there are a number of flaws in Pascal's Wager:

(1) The choices are not limited to the two Pascal named. If God is infinitely incomprehensible, then there are infinite variations of God from which you must choose.
(2) Pascal's Wager amounts to a choice between Roman Catholicism and Atheism, as evidenced by Pascal's assumption that God has prepared a place of torment for non-believers, which was not a part of his original premise. But if you choose to believe in God, yet choose the wrong religion, you are in just as much peril as if you chose Atheism. What if you believe in God, but call him Allah?
(3) Believing in God, if it turns out that God does not exist, is a colossal waste of a limited life — a life that could have been used to better the lives of your family and friends and even the world.

By far the most serious flaw in Pascal's Wager is the idea that we may choose what we believe, which is as if to say, "Tomorrow I will choose to believe the sun is a ball of fire drawn by Apollo in his chariot, but today I will believe it is the nearest star to Earth." We believe only what makes sense to us, not what we wish. If evidence is important to us, and we find the evidence for God-belief unconvincing, belief in God is impossible. True, we can profess to believe in God — that is, we can lie. And church torturers made doubters "profess" by the thousands.

Never a picture of good health, Pascal died in Paris on 19 August 1662, probably from a combination of tuberculosis and stomach cancer, at the age of 39. At the last he was a Jansenist Catholic. No one knows if Pascal his won his Wager.

* Pascal states the Wager this way:
"If there is a God, He is infinitely incomprehensible, since, having, neither parts nor limits, He has no affinity to us. We are then incapable of knowing either what He is or if He is ... you must wager. It is not optional. You are embarked. Which will you choose then? Let us weigh the gain and the loss in wagering that God is. Let us estimate these two chances. If you gain, you gain all; if you lose, you lose nothing. Wager then without hesitation that He is."